The United Nations is trying to figure out how to categorize cannabidiol (CBD), a non-psychoactive and medically beneficial cannabinoid contained in cannabis. And UN officials, through the US Food and Drug Administration (FDA), are asking for your help.

FDA officials put out a call for comments in this morning’s Federal Register, seeking information about CBD and how the UN’s World Health Organization (WHO) should designate it under the 1971 Convention on Psychotropic Substances. In doing so, the FDA acknowledged the ‘beneficial’ effects CBD has shown in patients with neurological disorders.

All those who have information on, or experience with, the use of CBD as a healing substance are encouraged to comment at this federal website. Sept. 13 is the deadline for public comment, and no input will be considered after that date.

CBD is one of 17 substances currently under scheduling review by the WHO. This process affects only the WHO and the United Nations. It does not directly deal with the status of CBD under the federal Controlled Substances Act—but it could have an indirect effect by influencing the outcome of the conflict over the federal categorization of cannabidiol.

FDA Deputy Commissioner Anna K. Abram, who sent out the notice this morning, acknowledged that “CBD has been shown to be beneficial in experimental models of several neurological disorders, including those of seizure and epilepsy.”

That puts the FDA at odds with the US Drug Enforcement Administration (DEA), which late last year attempted to declare CBD a Schedule I substance. Schedule I drugs, by definition, have “no currently accepted medical use in treatment in the United States.”

The other drugs under consideration by the UN include six types of the synthetic opioid fentanyl, five synthetic cannabinoid agonists (of the K2 and Spice type), and the psychoactive muscle relaxant ketamine. 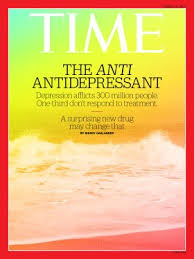 The UN has struggled with ketamine for years, having previously reviewed its status in 2006, 2012, and 2014. In 2015, a UN agency decided to postpone a proposal to place ketamine in Schedule IV.

Ketamine is currently not scheduled under international controls.

As the UN reconsiders ketamine one more time, the drug’s usefulness as an anti-depressant is receiving major mainstream coverage. Last week Time magazine ran a cover story on ketamine that heralded its potential as a breakthrough drug:

“The biggest development has been the rediscovery of a promising, yet fraught, drug called ketamine. It’s best known as a psychedelic club drug that makes people hallucinate, but it may also have the ability to ease depression—and fast. In a race to shape the next generation of anti-depressants, Johnson & Johnson and Allergan are fast-tracking new medicines inspired by ketamine.”

The FDA will prepare an evaluation of the drugs under consideration for the United Nations, but federal officials will not make any recommendations to the UN regarding whether the drugs should be subject to international controls.

For further information, contact James Hunter at the FDA’s Center for Drug Evaluation and Research, Controlled Substance Staff in Maryland. He’s at 301-796-3156, and can also be reached at james.hunter@fda.hhs.gov.

If you’d like to give your comments to the FDA, you can do so by CLICKING HERE. Clicking will take you to the Regulations.gov web site for this particular issue. Then click on the blue “Comment Now!” button on the upper right of the Regulations.gov page.